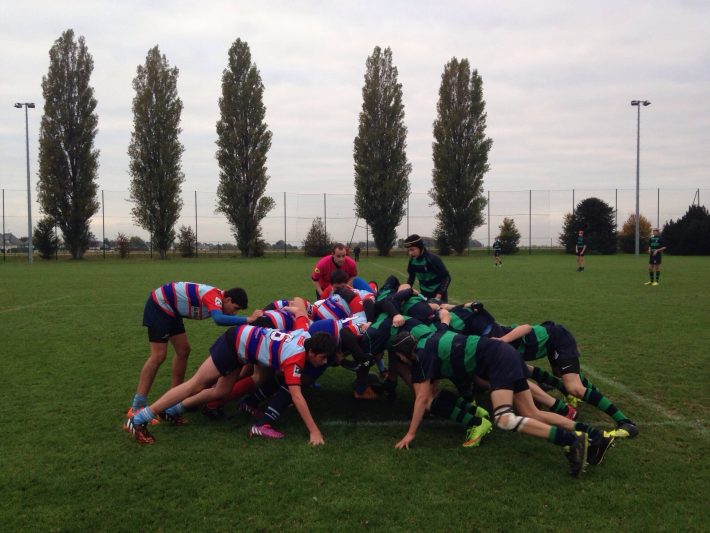 A week ago the Under 14 rugby team of the Rams Rugby Club went on a tour in Normandy, France and also went for the May Bank Holiday weekend. David, the manager of the U14 teams gave a full report about their trip to Normandy and the games they played against the teams they encountered in France.

Before the big Tour day the teams had some time to spend with their family and siblings in the French markets, and connect with the French culture and landscapes. After this pleasant time everyone had spent, the next day started very strictly for the U14 teams. They had to be at breakfast at 7:45 and leave at 8:20 for St. Lo. St. Lo is a small club with two pitches, and is part of the event which takes place over a few clubs that are near the Municipal venues. The parents and siblings could join them one hour later at the St. Lo club, after they had their breakfasts.

At the club the teams had their own changing rooms where they could prepare, have small training talks with the coach who made the teams ready for the games. The other teams weren’t known by the coaches so they didn’t know what to expect.

The two U14 teams played against other teams on the Tour. One of the U14 teams (team A) played three games and won all of them. Team A managed to go to the finals of the Tour which took place at the Municipal Stadium. The other Team, B, didn’t manage to qualify, as they lost to the opposition, RC Rueil. The day they had played the games it was raining very aggressively, and some of the players of Team B got wounded. One player had his nose broken, another had a torn or spasm muscle.

The A team was fantastic against RC Rueil and they won. RC Rueil is a team that won most of their local games, the best team in their age group, but they lost to the U14 team A of Rams Rugby Club. The Redingensians coaches only found out about how great their opposition was, when they got back from the stadium and made a little search. This is an important win for the UK Team.

The winner team was awarded the Trophy at the Municipal Exhibition Centre. Redingensians Rams Rugby Club then celebrated the win with a lot of fun visits and activities. On the list of the attractions they visited are the Arromanche, site of the Mulberry Harbour, the 360 cinema, the beach, The American Cemetery at Omaha, Cherbourg and then just back home. All these activities were well deserved by the U14 teams which had amazing results.